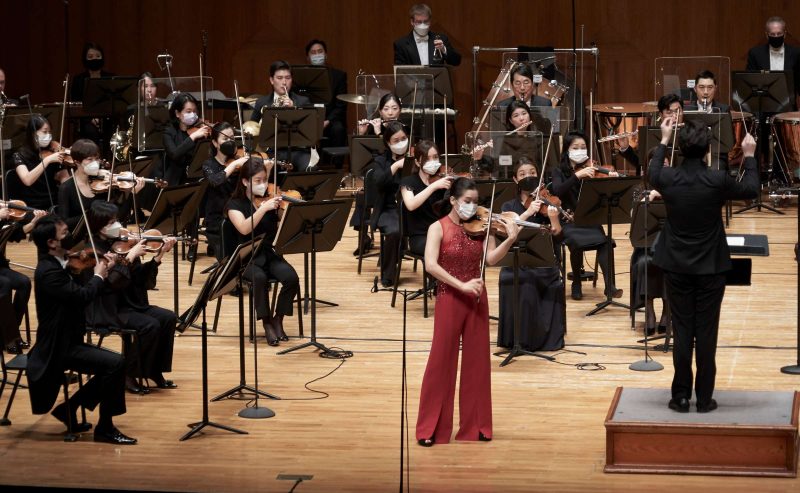 Music vs. Covid-19: the state of play in Asia, America and Oceania

Last month, I reported on the state of live classical music performance in Western Europe – a situation that has, sadly, taken a turn for the worse since then. This month, I’ve turned the spotlight away from Europe and spoken to people across four other continents.

The Asian approach to classical music mirrors their approach to the pandemic generally. Most Asian governments are more authoritarian than those in the West and the continent learned how to deal with coronavirus epidemics the hard way with SARS in 2002-2004. All the countries I spoke to have clamped down hard on personal freedoms and been quick to impose test and trace regimes. Mask-wearing is the norm in Asia.

China, where Covid-19 started, was one of the first to cancel performances: Xi’an Symphony Orchestra’s Sophia Li bemoans the loss of their whole 2020 calendar, including visits from Martha Argerich and other international stars. But with reported cases now close to zero, music has resumed with audience capacity up to 75% and unrestricted orchestra size. However, many projects featuring international artists, travel restrictions retain the potential to cause planning nightmares. Personal precautions remain: temperature checking, mask wearing, electronic check-in, frequent tests for performers and theatre staff.

Since August, Hong Kong’s daily rate of new cases has been around 10, so it was unfortunate, to say the least, that the Hong Kong Philharmonic’s bass clarinettist tested positive shortly after their season opening concert on October 9th. The whole orchestra was sent into 14 day quarantine (without Wi Fi, as one musician complained), so concerts were cancelled for that period; the remainder of the season should be unaffected. Elsewhere, many concerts are proceeding, albeit to reduced audiences and with the usual raft of safety precautions.

Masks all round for the Seoul Philharmonic at Seoul Arts Center © Tae-uk Kang
Korea’s Covid-19 case count and death toll are higher than China’s, but still low compared to most Western countries, with daily new cases running at around 80 (by comparison, the UK’s lowest daily rate was around 550, the current rate being over 20,000). Concert halls are open with limited seating (usually 50% capacity); the Seoul Philharmonic returned to performances on 16th October. Whole seasons have not been cancelled but many individual events have been; concerts have been reduced both in length and in performer count (to a maximum of 50). The biggest disruption has been to the schedules of visiting artists, who have to quarantine for 14 days: Tongyeong Festival director Florian Riem describes the case of conductor Christoph Poppen being stuck in a very small hotel room with the same cold meal delivered to his room three times a day. Once in the country, surveillance is intense: when Riem’s phone switched itself off overnight for a software upgrade, the authorities called him in the morning to demand an explanation.

Things are also easing in Japan, although orchestras feel “as if we are stepping on thin ice, praying the clusters will not occur at the concert venue”. The limit on 50% audience capacity was lifted on 19th September, permitting the sale of nearly 100% of seats. At Tokyo’s New National Theatre, the movement direction for A Midsummer Night’s Dream has been reworked to permit cast members to keep social distance: assistant director Leah Hausman has done a remarkable job of making the production look natural in despite of this. The NHK Symphony have cancelled their 2020-21 subscription concerts, replacing them by one hour interval-free concerts with Japanese artists only. Suntory Hall have followed similar restrictions, as well as extending the size of their stage in order to be able to play one of the works for their Summer Festival. There are hopes, however, that quarantine requirements will ease in November.

Asia’s tightest government guidelines are in Singapore, where “cast and crew” are limited to 50, of whom no more than 20 may be unmasked. The Singapore Symphony Orchestra’s main season will be online-only until February, although they tried a “pilot concert” in October: the 50 tickets to socially distanced audience members were sold within three minutes. The SSO is evaluating the possibility of small scale events in the months until then.

The attitude to Covid-19 in Asia seems to be characterised by two things: broad acceptance of draconian restrictions on personal freedoms and the assumption that Covid-19 needs to managed on a continuing basis, i.e. there isn’t going to be a clean break of “when Covid is over” any time soon.

Australia and New Zealand have some of the lowest Covid-19 infection rates and death rates. Like everywhere else, however, most live performances were shut down in March and only now are they beginning to resume. New Zealand Symphony Orchestra have cancelled several concerts, but are going ahead with others. As everywhere, travel restrictions on visiting artists are problematic.

Like many other houses, Opera Australia has shut down live performances and provided a digital offering. Artistic Director Lyndon Terracini feels that OA’s digital programmes were popular, but that “people are now over the digital experience; they want something live”. Their Ring Cycle in Brisbane is still scheduled for November and they should shortly be announcing their summer season in January; restrictions on travel may have an effect on the size of the Sydney audience, 30% of which was composed of tourists in pre-Covid times. Terracini is cautiously optimistic about their future plans, but is all too aware of the second wave numbers from Europe and of the financial consequences of any further shutdown. He also worries about the long term psychological effect on musicians, with the precariousness of their profession cruelly exposed by the pandemic.

The contrast between Asia and the Americas could not be more stark. Most Americans I spoke to decided very early on that seasons would be cancelled altogether; theatres across the United States are almost universally dark. Opera America’s Mark Scorca doesn’t mince words: “until there is a vaccine that is generally available and generally effective, it will not be possible to assemble the orchestral musicians and choruses and soloists in staged opera in a theatre as we know it”. The Met has cancelled its whole 2020-21 season, with General Director Peter Gelb pinning his hopes on a vaccine arriving in time for a return to normality next September.

Live opera hasn’t died out completely: San Diego Opera is one of several companies who have experimented with drive-in; Atlanta Opera has created performances in a big tent; Boston Lyric Opera has created their mobile “Street Stage” that can be trucked around the city. But without state subsidy, putting on opera for an audience of 250 or 500 people simply isn’t economic. Most US companies are looking to late 2021 for a proper restart.

Opera Philadelphia closed down in March; they have managed one outdoor concert in September. Their new Tosca was due next May: they hoped to stage this at the Academy of Music, their usual home, but are now identifying possible outdoor venues. They have pivoted to digital with a new channel launched last month, in response to audience survey results along the lines of “streaming opera doesn’t satisfy the itch. But if it’s the best we’ve got, do it properly and be creative: don’t just put four cameras in row J”.

La bohème drive-in at San Diego Opera © Karli Cadel
LA Opera has been the outlier: CEO Christopher Koelsch is strongly against outright cancellations and has done his best to maintain his contracts with artists, being responsive to “an extraordinarily dynamic situation” and postponing performances (or pivoting to video) where necessary. Tickets are still on sale for January performances, although there is continuous re-evaluation of what may or may not be possible.

Covid-19 safety regulations have varied widely between states. All public gatherings in Los Angeles have been banned indefinitely; in contrast to LA Opera, the LA Philharmonic has cancelled everything from last March through to summer 2021. At the other end of the spectrum, Houston Symphony has a good number of concerts, albeit with shortened programmes, smaller ensembles and audiences limited to 25% of normal capacity, a figure that’s similar for several other orchestras. Dallas Symphony Orchestra are playing to even smaller audiences (50-75) limited to subscribers. But these are the minority: of the 1,600 professional, community and youth orchestras in the US, most are not performing live concerts in their halls.

Several orchestras – or, at least, small ensembles of their musicians – have been able to perform outdoors in a variety of improvised venues: parking lots, hospitals, libraries. Boston Symphony Orchestra string players have been touring their city in a duck boat, landing to play “pop-up concerts”, New York Philharmonic musicians have roamed the city in their “Bandwagon”, a converted pick-up truck.

The New York Philharmonic’s Bandwagon © Erin Baiano
The attitude in Canada has been similar to that in the US, although with death rates running at under a third of those in the US, Canada has seen somewhat more live concert activity. Still, Quebec’s restrictions on audience numbers have flip-flopped from 50 to 250, then back to 50. Orchestre Symphonique de Montréal cancelled their main 20-21 season, but Marianne Perron explains that they wanted to maintain some form of activity to give hope to their community and were able to put on around 100 concerts through the summer. The re-imposition of a 50 person audience limit has made most plans unviable and they are now looking to video. Opéra de Montréal’s Patrick Corrigan expects restrictions to continue for a while, but hopes to bring a new production to the stage for next March. They have received a substantial grant from the Quebec Arts Council, which they have been using to pivot to video; Corrigan is proud of his government’s support for the arts. Private benefactors are joining in: Toronto Symphony Orchestra have just announced a “philanthropic investment” of nearly $4m over five years.

Colombia experienced the longest total lockdown in the world, Banrepcultural’s Mauricio Peña tells me. Peña is another of those who saw virtue in making an early decision to accept the inevitable: as early as March, they cancelled the whole of their 2020 and 2021 seasons, with a view to gaining the freedom to reprogramme completely in the way most appropriate to the changed circumstances. Once again, this has been a major pivot to digital, producing podcasts, playlists and making video performances available in any way they can. It’s the same for the Orquesta Filarmonica de Medellín, who can’t currently foresee when they might welcome an audience back to the theatre and are doing all they can to find alternatives, both outdoors and online. Things are looser in Chile, where the Teatro Municipal de Santiago has been able to operate at 50% capacity.

The Kabuki actor Sanogawa Ichimatsu © The Trustees of the British Museum
Every country responds to Covid-19 in its own way: here are some stories from Asia.

In China, movement between cities has become broadly permitted, leading to immense traffic on the highways during the National Day Holiday in early October. This has spawned any number of impromptu concerts from musicians getting out of their gridlocked cars.

In Seoul, one of the world’s great technology hubs, concert-goers are greeted by images of themselves on giant screens: in green if their temperature is OK, in red if they’ve been detected as feverish.

In Japan, where you are enjoined not to yell “Bravo”, people are making “Bravo cards” to be waved in the air instead; one orchestra is selling a “Bravo towel” in its foyer. And to understand Japanese rules on concert seating, look no further than the chequerboard-like pattern of “Ichimatsu-monyo”, a textile named after its most ardent fan, one of the great Kabuki actors of the 18th century.

Let’s conclude with a note of optimism from Opera America’s Marc Scorca: “I believe that in the next years as we come out of this crisis, there will be a blend of a return to some of the old and incorporation of the new. That blend will be healthy for opera in the United States.”