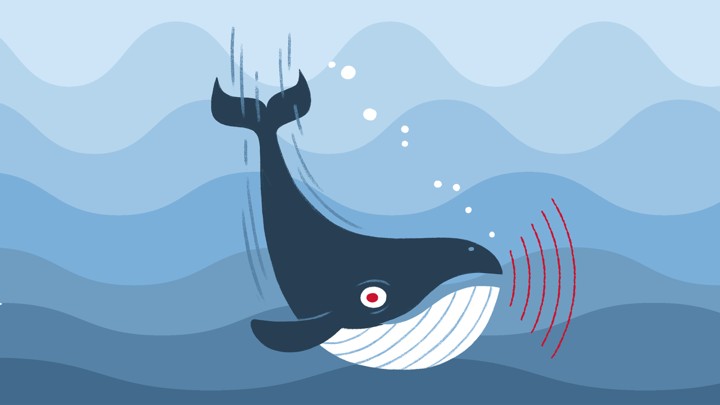 Whale songs are getting deeper

Scientists have theories as to why—some worrisome, some hopeful, all involving humans.

Is any environment more secluded from our imagination than the seas surrounding Antarctica? Icebergs grind above a seabed dotted with salps, sea squirts, sponges, and other barely animate organisms. The sun scarcely rises for half the year. Under the elemental conditions at these latitudes, Antarctic blue whales exist in a world defined by bioacoustics.

Blue whales, Earth’s largest animals, call to others of their kind, though exactly what these cries communicate remains a mystery. Whether to attract a mate, to repel a rival, or for some other social purpose, the sounds blue whales make are less song, more drone—a tectonic rumble on the furthest edge of human hearing. That the sounds of blue whales seem simple might suggest they are unchanging across generations. But these atonal sounds have begun evolving. Since at least the 1960s, their pitch has downshifted the equivalent of three white keys on a piano. Scientists have theories as to why—some worrisome, some hopeful, all involving humans.

The deepening of Antarctic blue whales’ sounds is not unique to the subspecies. Groups of pygmy blue whales found near Madagascar, Sri Lanka, and Australia, as well as fin whales, which live in seas around the world, have also dropped their pitch. (Even before this change, fin whales emitted sounds so low as to be nearly imperceptible to humans; the wavelengths of their calls were often longer than the bodies of the whales themselves.) In a study last year that analyzed more than 1 million individual recordings of whale calls, scale shifts were found across species, and among populations that don’t necessarily interact with one another. Which is to say, whatever has triggered the change doesn’t seem to have a specific geographic origin.

The underwater clamor caused by maritime traffic and extractive industries might seem a likely culprit. After all, such noise is known to interrupt whales’ foraging and interfere with their vocal interactions. But although some whales do adapt, in limited ways, to artificial sounds in the ocean—by pausing their calls to avoid competing with the passage of cargo ships, for example—scientists don’t believe that the deepening whale calls are a response to sonic pollution. They have identified lowered pitches even across populations of whales that live in seas without major shipping routes, where mechanical noise is negligible.

Another possible explanation for the change in whale calls is the achievements of global conservation efforts. At the start of the 20th century, an estimated 239,000 Antarctic blue whales occupied the Southern Ocean. By the early 1970s, decades of commercial whaling—initially by Norwegian and British whalers, and later by illegal Soviet fleets—had decreased the blue-whale population in the region to a mere 360. But since protection of the subspecies began in 1966, that number has begun to rebound. Scientists have speculated that the whale’s anatomy determines that the louder it gets, the higher the pitch of its calls. As populations have grown, then, the whales may have decreased their volume because they are more likely to be communicating over short distances. In other words, Antarctic blue whales may be lower-toned today than in previous decades simply because they no longer need to shout.

From September 2018: Giants of the deep

Last year’s study of whale calls also suggests a more ominous reason for the drop in pitch, however: Perhaps whales don’t need to be so loud because sound waves travel farther in oceans made acidic by the absorption of carbon dioxide.

Carbon dioxide in the atmosphere, meanwhile, may indirectly influence whale voices in other ways. Recent monitoring of Antarctic blue whales shows that, during the austral summer, their pitch rises. Researchers have hypothesized that in warmer months, the whales must use their forte volume to be heard amid the cracking ice—a natural sound amplified by unnatural processes, as rising temperatures exacerbate ice-melt. So the impacts of a warming planet may modulate animal sounds even in remote places with barely any humans, and where the most thunderous notes come not from ships, but from the clatter of breaking ice.

We may not yet know what the sounds of blue whales mean. But whether through our intent to preserve these creatures, or as a result of refashioning their environment, our deeds echo in their voices.

This article appears in the October 2019 print edition with the headline “Going Deep.”