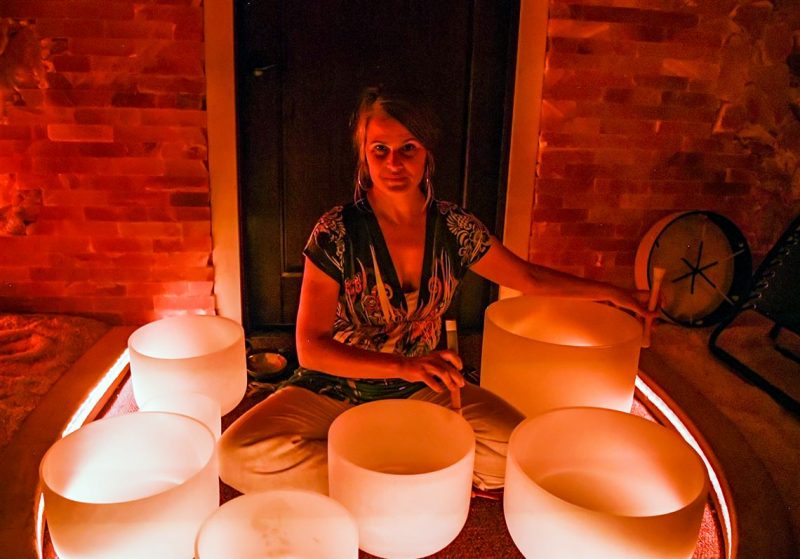 Bathing in sound: Are didgeridoos and crystal bowls the next version of ‘healing crystals’?

In an expansive second-floor yoga studio, drawn window shades blocked most of the mid-Saturday sunlight but did little to hush traffic noise from creeping in. Nevertheless, the yogi asked her class of 15 to lie down and began a spoken meditation, her voice soothing away the rumbles and roars of the outside world.

So far so normal. But then came the crystal bowls.

Brooke Smokelin began running a striker around the rims of several large singing bowls at I Am Yoga, a small studio in Squirrel Hill, coaxing a pure, unbroken tone that pressed itself against the ears with an almost physical presence. She began with a single bowl but soon added other pitches — different sized bowls — to the soundscape, playing nonstop for about 45 minutes before gently bringing participants out of their reveries with gentle drumming and scented essential oils.

By a show of hands at Ms. Smokelin’s session, this was nearly everyone’s first “sound bath,” a sound therapy practice that’s been catching on like pumpkin spice in October in holistic communities around the country. Sound therapy itself, the idea of using music and vibration therapeutically, has been around thousands of years and crops up in various cultures.

But interest in sound therapy has soared in tandem with renewed global curiosity about cosmic energy and spirituality. Case in point, sales of “healing crystals” have doubled in the previous three years.

Some sound therapy practices involve didgeridoos — a tube-like Aboriginal instrument — gongs, therapy harps and tuning forks, while others use specially synthesized “binaural beats” to alter brain waves and reduce stress. Many practitioners have developed partnerships with yoga studios, acupuncturists or chiropractors to find clients, and they’re expanding of late into hospitals, retirement communities and even concert halls.

So let’s dig in: How much of this sound therapy is mystical placebo, how much is scientifically based, how much does it cost, and — if it works for some people — does it really matter?

“People either respond incredibly positively to this and they really like it and are transported, or they realize it’s not for them,” said Laura McDermit, manager of social engagement at the Carnegie Museum of Art in Oakland, which has been programming sound baths for a couple of years now as part of its wellness days, either in the galleries or in the concert hall.

“This is like a gateway drug to meditation,” said Ms. Smokelin, a Pittsburgh native and a pioneer of the sound therapy scene in the city. She leads and sells out multiple sound bath sessions a month for about $20 or $25 a person in different yoga studios and wellness centers, and she maintains a small cadre of private sound therapy clients as well. (Information at chakrayogahealing.com.)

Ms. Smokelin grew up in a musical family, singing and playing several instruments before studying environmental education at Cornell University 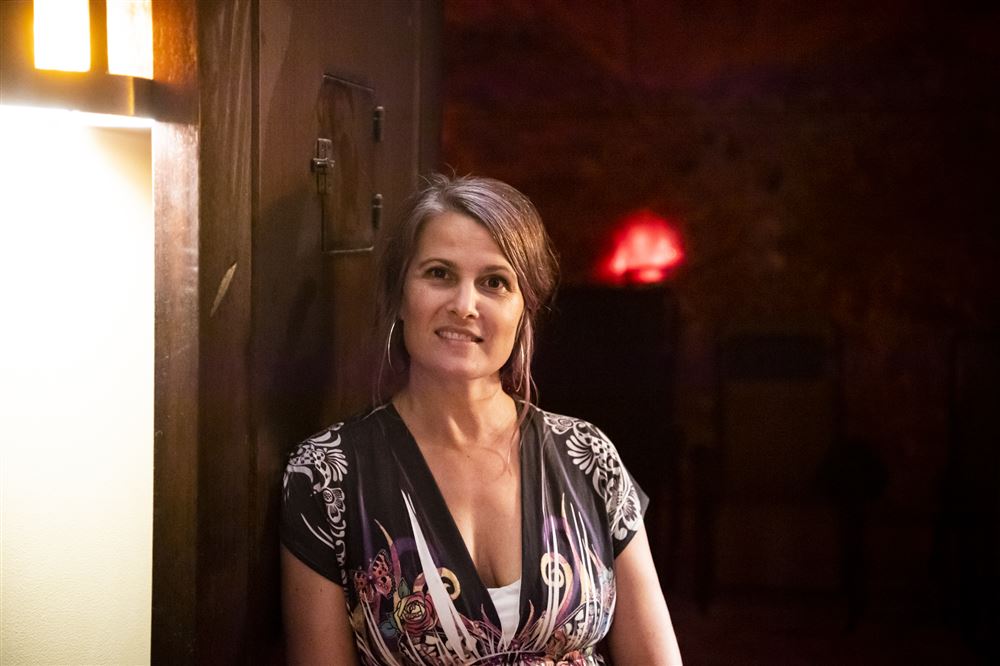 During a deep dive into meditation and sweat lodges in her 20s, Ms. Smokelin, 49, said that she received a very clear vision to heal bodies of water with sound. She came by her first crystal bowl at the age of 26 and, in addition to teaching yoga and her practice as a sound therapist, created the River Alchemy Project to travel the country to raise awareness of river pollution and hold cleansing ceremonies. She said she considers sound therapy to be an extension of her mission to heal bodies of water, as after all the human body is made up of about 60% water.

“I’m not woo-woo at all,” she said, matter of fact, right after tapping tuning forks over me to probe the state of my individual chakras in a demonstration of a private session. “This falls right in between a science and an art — you don’t have to quantify relaxation.”

She was equally comfortable talking about the way certain musical keys interact with the body’s energy fields and the science behind why certain harmonies like octaves and perfect fifths feel good. And she’s coordinating with hospitals to run a stress-management sampler that involves sound therapy.

One of Ms. Smokelin’s clients, Jenn Wertz, formerly of the band Rusted Root, didn’t know what to expect when she tried her first sound bath.

“It ended up being incredibly immersive and relaxing, like a long nap or a meditative trance,” said Ms. Wertz, 50, of Swissvale.  After a doctor told her she was having some heart trouble, Ms. Wertz participated in a private chakra clearing session with Ms. Smokelin, and a later EKG reading at UPMC Magee-Womens Hospital, Ms. Wertz said, showed improvement. Now, she seeks out sessions as needed.

Research into music therapy is growing deeper every day, but sound therapy is still considered to be holistic medicine. As such, there’s not much definitive evidence of its effects, although there is some research to suggest that tuning fork therapy can help relieve muscle and bone pain.

A 2016 observational study in the Journal of Evidence-Based Complementary & Alternative Medicine found that singing bowl meditations can be a low-cost method to reduce feelings of tension, anxiety and depression. The study of 62 individuals was conducted at three wellness/spiritual centers in California and approved by the University of California, San Diego Institutional Review Board. Tension, anxiety and depression are at historic highs in the U.S. (A Blue Cross Blue Shield study found that diagnoses of depression increased by 33% from 2013 to 2016.)

But whether it’s an innate quality of the vibrations or the fact that the sound acts as an aid to meditation is not totally clear.

Joseph Carringer, another sound therapist practicing in the Pittsburgh area, said that sound therapy’s most important function is to help people meditate.

“Fundamentally, that’s all any of us are doing, putting the mind in a space to consciously engage our healing abilities,” he said, adding that there is extensive literature on health benefits of meditation. Like Ms. Smokelin, Mr. Carringer has also extensively studied the subtle energy system and chakra cleansing. He’s been practicing for 15 years now and has given demonstrations at holistic associations and expos around the country.

Mr. Carringer chose a different weapon for his practice — “I woke up from a dead sleep in 1996 and sat up saying, ‘I’m gonna play the didgeridoo,’” he recalled. “I didn’t know what it was, but I knew that it had been in ‘Crocodile Dundee.’” And play it he did, in clubs with blues and jazz bands and, later, in musical meditations and sound therapy sessions. (He still plays on occasion with Liz Berlin of Rusted Root.) Mr. Carringer, the former president of the board of the New England Holistic Health Association and a certified EMT, leads meditation and chakra clearing workshops in Pittsburgh and around the country and also maintains a private client roster. His sessions (information at didgetherapy.com) draw anywhere from 10 to 50 people depending on the size of the space. His collection of more than 20 authentic didgeridoos — “I have, like, a Stradivarius set,” he said — hangs on the walls of his house in Forward.

Janice Anderson, 73, has about three private sessions with Mr. Carringer a year in a small town near Newburry, Mass. “It’s like getting regular tuneups,” she said. “It’s very meditative and very deep. What it does is the frequency, when your body receives it, allows for a balancing and harmonizing on a cellular level, which allows for balancing and healing. I feel the strength of the vibration, and I feel strength.”

Both Ms. Smokelin and Mr. Carringer said that many of their private clients are people who have tried everything else and are looking for creative ways to manage pain or illnesses, or people who attend group sessions who want to go deeper and explore sound’s potential to heal. They’ve worked with clients expressing, fatigue, chronic pain or illness.

“If you go to a sound therapist and expect them to heal you then you’re not going to be healed,” Mr. Carringer said. “When I started everybody was a healer, but I put my foot down and said, ‘I’m not a healer.’ I made the distinction of sound therapy. I’ve seen more people use that in the last 15 years.”

He’s passionate about the difference between healing and therapy, and he’s wary of the courses that are springing up around the country offering “accreditation” for interested sound healers. There are numerous online forums for sound therapists ranging in size from local to global, and many sound therapists have formal backgrounds in medicine, psychology or other more mainstream disciplines.

But there isn’t a formal accrediting body yet.