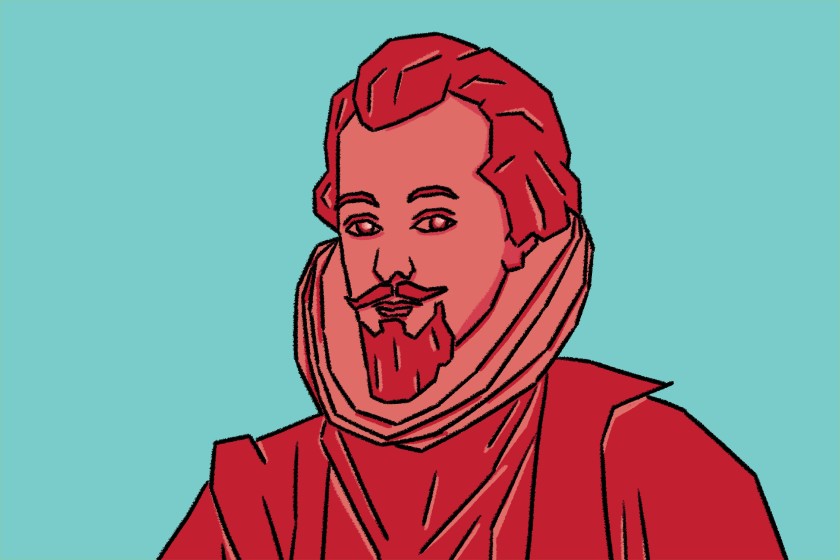 Why do we feel better after a good cry? In John Dowland’s music, tears open the soul

In “An Anatomy of Melancholy,” his crazy, magnificently tireless compendium of all that illed clinically depressed Elizabethan England, Robert Burton now and then turned his attention to America and Americans. “When [an] emperor of America departs,” he wrote the year after the Mayflower reached our shores 400 years ago, our distant ancestors plagued themselves with their “superstitions, vexations, follies, torments” and the need to overcome “new diseases.”

If a lutenist happened to be on the Mayflower, as has been presumed on a new recording, the journey would have included luminous lute dances — pavanes, galliards and alemandes — by England’s greatest living and gloomiest composer, John Dowland. It was as though he were made to serve his melancholic era — with its political, intellectual, religious and social uncertainty, its questioning of science — and to help drive our sober Pilgrims to a New World.

As far as Burton was concerned in his 1,400-page, wickedly irreverent survey of melancholy, with 88 reasons for ending it all, “Musicke” was a means of counteracting depression. Let its expression of sorrow absorb your own. Who, then, better than the composer whose motto was “semper Dowland semper dolens” (always Dowland, always doleful)?

He was also always Dowland, always in trouble. Said to have been an extraordinary lutenist, Dowland was ever conniving, ever complaining, ever in debt, ever ingratiating himself in court, ever scheming. He got himself involved in international intrigues that included an Italian plot to assassinate Queen Elizabeth and accusations of treason. As the notes to one recording of his masterpiece, “Lachrimae,” put it, Dowland was “an egocentric ever at odds with a world by which he felt himself rejected.”

He was born in 1563, a year before Shakespeare. Dowland’s lute song “Flow My Tears” has become history’s longest-lasting hit song. It was published in 1600, became an instant sensation and to this day is performed and recorded by early music specialists and pop stars alike. Sting sings it and called it “a song about hopelessness that is strangely uplifting.” (Philip K. Dick’s “Flow My Tears, the Policeman Said” is a dystopian sci-fi warning of a Second Civil War that could dismantle democracy in America and eliminate its Black population.)

Dowland serves to make us wary of stereotypes. This wondrous, strange egomaniac who draped his identity — and sales pitch — in a veil of fashionable morbidity proposed a miracle cure for his age of anxiety: “Lachrimae, or Seaven Teares Figured as Seaven Passionate Pavans,” as Dowland titled it.

The magic potion is a perfectly rounded teardrop. A poignantly perfect object of mysterious beauty, the tear musically is held to light, examined from every angle. Its shape is studied, its ingredients are analyzed. What makes it equally an emblem of sorrow and of joy? Is it a sign of weakness or strength, of security or insecurity? These kinds of questions linger across centuries. Where do we, in our own divided America, for instance, stand on the issue of tears, after having voted for and against empathy?

Most peculiar of all, why do we emerge from the tearjerker opera, movie or novel feeling better? Why is there humor in melancholy, be it in Burton’s “Anatomy” or, say, Lars von Trier’s startling movie “Melancholia”? That is the territory — in which emotion meets analysis and philosophy and music theory — that Dowland explores with merciless abstraction.

The tears in these stately Renaissance dances are old and new tears, tears of sighing and of sadness, crocodile tears and their counterpart, truth’s tears. With what seems like merciless delight in the comedy of life, Dowland dispenses to lovers tears of anguish or joy, a reminder that you never know how things will turn out.

Dowland published his seven “Lachrimae” in 1604 in a collection of 21 dances for a consort of five viols (the early versions of our modern string instruments) and lute. Livelier galliards and almands to some small measure counteract the downcast mood. These are named for various nobles with whom he courted favor and, possibly, funds. But leave it to Dowland to give himself the loveliest, noblest and most sympathetic pavane, suffused with a honeyed sweetness, the title “Semper Dowland, Semper Dolens.”

The ordering of the pieces is unclear. Some ensembles prefer to break the mood of the Lachrimae with the other dances. Others stick to only the seven “passionate pavanes” taken as a half-hour-plus slow, quiet journey into the profound dark night of the soul. By expressing our deepest fears and pains, Dowland offers an exit route out of depression.

Each of the “Lachrimae” begins with what has become known as the “tear” motif — four descending notes, down the interval of a fourth, with a distinctive daaaaaa-da-da-daaaa, rhythm. The first, “Lachrimae Antiquae,” is essentially “Flow My Tears” arranged in five parts (two trebles, two tenors and bass viols), with the lute adding color, decoration and melodic emphasis. “Flow My Tears,” it might be added, was based on yet another “Lachrimae,” one of Dowland’s best-known solo lute pieces, not part of this set. Ever doleful, his tears ever flowed.

Emotion, however, in these “Lachrimae” is remarkably restrained. Each has the same three-part format, with each part repeated. Their titles are in Latin to further maintain formality. “Lachrimae Novae” (“New Tears”) begins the process of introducing new elements, more modern harmonies with greater emphasis on dissonance and freedom of melodic line.

But as Dowland proceeds through his sequence, it remains up to the listener’s fancy to supply extra-musical sensations — sighs, or the subtle harmonic and melodic and contrapuntal differences between garden-variety sad tears, exaggerated tears or true tears. Would we hear the supposed melancholy humor of a lover’s tears without Dowland’s poetic suggestion?

There is marvelous invention in the part writing, but even here, the counterpoint between these quite similar-sounding viols requires considerable concentration to grasp. Headphones help. Without the closest of listening, the seven pavanes can otherwise, most agreeably but also least convincingly, simply flow by as inspired background music. But by making melancholy so agreeable, Dowland, in his expecting the mental work of close listening to hear special details and find meaning in them, occupies your attention. Rather than superficial distraction, however, this becomes a more truthful distancing of depression.

Thus, the truth of the concluding “Lachrimae Verae,” which brushes off the melancholic luster of tears. The textures become more transparent. Decoration diminishes. Tones and harmonies take on a new purity. A fog of counterpoint is lifted. We see more clearly. Melancholy is not gone, that would be too much. The tear is Dowland’s money motif. But we see it, hear it, for what it is. Part of nature.

In “Melancholia,” the movie, the planet Melancholia crashes into Earth with the strains of Wagner’s “Tristan und Isolde” blaring out the sensation. The Earth ends in ecstasy. Dowland keeps us alive by remaining quietly alert, in control, as we gracefully wipe our eyes.

With live concerts largely on hold, critic Mark Swed is suggesting a different recorded music by a different composer every Wednesday. You can find the series archive at latimes.com/howtolisten, and you can support Mark’s work with a digital subscription.

1. The best place to start is the song “Flow My Tears,” which has been much recorded. One of the most recent is by the engaging French countertenor Philippe Jaroussky.

Or try tenor Peter Pears, the partner of Dowland-besotted Benjamin Britten, with lutenist Julian Bream. Both are on YouTube.

2. An excellent recent recording of the seven “Lachrimae” by the young French viol consort Sit Fast pairs a slow, illuminating performance with a work by the contemporary British composer George Benjamin. It’s available for download, on streaming services and on CD.

3. The extraordinary Catalan viol player Jordi Savall takes the approach of mixing the “Lachrimae” with the other dances in the collection in readings of glowing beauty.