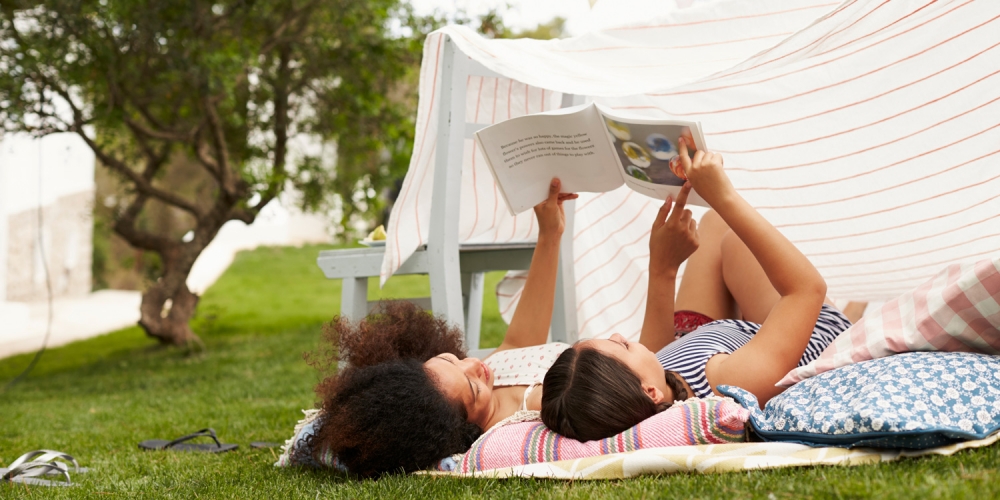 As the achievement gap has widened over the past quarter century, educators have increasingly focused on summer pastimes as both a key factor and a solution. Higher-income children are more likely to fill their days with outdoorsy camps, music and coding classes, and travel. Making those experiences more accessible to and commonplace for all children, the theory goes, can help ensure that low-income kids keep learning at the same rate.

But time spent at home, reading independently or talking about books and stories with parents, seems to have a greater influence on children’s academic growth than summer camps or vacations, new research suggests. It’s a reminder that despite the social-emotional benefits (and the fun) of camp, quiet days with family can offer valuable learning moments too.

The study, conducted by education policy researcher Kathleen Lynch, parses out how various summer activities, such as attending camp, reading and talking about math at home, vacations and daytrips, and summer school, have distinct academic effects. It suggests that families of all socioeconomic backgrounds have made strides in creating an enriching summer for their children.

It found that the gap between the number of high- and low-income children who attend camp (here, defined as non-school-based summer programs) and visit new places has increased over time:

But across the board, the amount of time parents spent reading, writing, and doing math-related activities with their kids also increased over time. While the SES-related gaps remained roughly the same, all parents were found to be more likely to use free time with their children in enriching ways.

Home-based activities were found to be more indicative of academic learning than any other activity.

Implications for Families and Educators

But increasing the number of academic learning opportunities available to lower-income students won’t necessarily bridge the achievement gap. At the very least, for academically focused opportunities to be effective, they need to be voluntary, rather than compulsory activities such as summer school or tutoring.

And while it’s no surprise that high-income kids tend to spend their summers in costlier ways — attending camp, traveling, and visiting attractions — less-expensive endeavors may have a stronger academic impact. Parents can make the most of summer simply by visiting a library on the weekend, talking about baseball statistics or gas mileage in the car, and reading together for half an hour before bed. Policymakers and schools can promote these activities in relatively inexpensive ways, too, by sending mailings, posting fliers throughout the community, or talking with parents at conferences and end-of-year celebrations.

But this isn’t a call to withdraw from summer camp. It’s a “promising trend” that parents across socioeconomic backgrounds are increasing their time doing literacy and math activities with their children, says Lynch, a doctoral student at the Harvard Graduate School of Education. But camps can have other valuable benefits as well, and more work needs to be done to increase access to those experiences.

“This large ‘summer-camp gap’ may be important because summer camps are hypothesized to provide kids with social-emotional benefits, such as building friendships and engaging kids’ extracurricular interests, and growing self-confidence and independence,” says Lynch. “Providing more opportunities for children from low-SES backgrounds to participate in summer camps could expand access to these benefits,” and help all children arrive back at school in the fall with the comprehensive skillset needed for success.