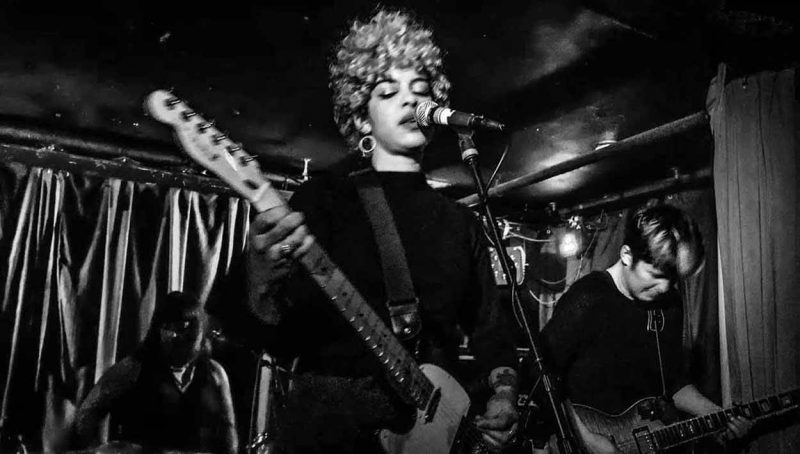 Written by Ivy Gray-Klein
Photos Courtesy of The Artists

We spoke with left-handed musicians Kathy Foster, Shamir, Madeline McCormack, and Cat Park about the unusual challenges and perks of playing southpaw.

While picking up a guitar or bass for the first time can be daunting, left-handed musicians are faced with another challenge: to lefty or not to lefty?

Some left-handed musicians commit to playing lefty despite instrument scarcity, while others force themselves to play righty in favor of convenience and accessibility. But lefty isn’t just a binary mirror of right-handed players—it opens up a range of alternative techniques. As a left-handed person who plays “standard lefty” (with an instrument designed to be played lefty), I was eager to hear from other left-handed musicians who deviate from the right-handed “norm.” I spoke with guitarists and bassists who play standard lefty, flipped lefty (a standard guitar or bass that is played upside down but not restrung), and righties who play lefty.

I’ve never doubted my decision to play standard lefty, but it has made me vulnerable to unique challenges. If I’m on tour with my band Corey Flood and something happens to my instrument, it’s unlikely I could easily borrow from another band or run into a music store and get something off the rack.

My current setup is an ‘80s Japanese Fender midscale lefty bass, but I’ve also experimented with flipping right-handed instruments. Desperate for a Fender Mustang, I took one to a luthier who flipped the nut, restrung it, added a strap button to the smaller horn, and rewired the volume and tone knobs. While I love my Mustang, the weight distribution takes a toll on my fretting hand, which also has to physically lift the neck while I play. Not to mention how annoying it is to have pedal inputs on the right side, which means trying not to trip over the instrument cable that’s crossed in front of you.

Despite all of this, I’m proud to be part of what feels like a ragtag team of southpaws. When you do find an instrument that works for you, it feels hard-earned. When you encounter another left-handed musician, you feel an immediate connection—and a little less alone.  I spoke with Kathy Foster, Madeline McCormack, Shamir, and Cat Park about their gear, unusual challenges, and how their playing styles influence their musicianship.

The Thermals, Hurry Up, All Girl Summer Fun Band, Roseblood

I mostly play a Fender Telecaster guitar and Fender Jazz bass. Both are traditionally set up [as left-handed].

I’m right-handed in most things, but play guitar and bass left-handed.

When I first picked up a guitar, I tried to play it right-handed, but it felt so wrong. My left hand felt so contorted trying to form chords. I quickly flipped it upside down and it felt much more natural.

About a year later, I bought my own left-handed guitar—a 1970s Gibson SG, which I still have. Then I had to re-learn all the upside-down chords I knew right-side up.

The biggest challenge is the limited selection. It’s really hard to find good left-handed guitars and basses. I always look whenever I’m in a music shop, even if I’m just there to buy drumsticks. Out of every hundred guitars in a shop, there will maybe be five lefties at the most, and they’re usually reissues of poor quality. It’s so frustrating! So I’m limited to what’s available. I very rarely see anything vintage. Fenders are reliable, sound good, and are relatively easy to find, so I went with the Telecaster and the Jazz bass. Both were new and pretty inexpensive. I’d really like to find a vintage hollow body or semi-hollow body guitar, but I’ve never seen one in any shop. I’ve seen a new reissue, but it was really cheaply made.

I can’t compare playing left-handed to playing right-handed because I can only do one, so I don’t know if there are any benefits to one over the other. I do think there are cool things to learn from playing a guitar or bass upside down. Something I’ve noticed while comparing playing upside down to right side up—with the strings in the reverse sequence—is that you can come up with chords and melodies you might never have come up with right-side up.

I play a left-handed Fender American Jazzmaster. My first real guitar was a left-handed electric hollow-body by Eastwood, then I bought a 1960s Hagstrom 1 and got it flipped [and restrung] to lefty.

I play guitar, bass, and write left-handed. But I throw primarily with my right hand and play drums—my primary instrument—in what you could call a right-handed or dominant positioning.

I began teaching myself guitar in elementary school with my brother’s right-handed, toyish nylon guitar. But I played it flipped upside-down and never questioned doing that.

I’m not sure I have any sharp feelings about it—if anything, I feel grateful in some amorphous way. The only pet-peeve would be how much of a scour it has been in the past to find a left-handed model guitar or bass that I really love, which I don’t think is a unique obstacle for other left-handed players.

For people who write left-handed, I have always wondered how much playing left-handed instruments affects the physical nuance and affect in songwriting—I want to say there is potentially more fluidity and direct currents in playing a left-handed model or position. But I think playing in the opposite positioning could be a positive challenge as well, in terms of being placed outside of one’s immediate instincts.

Even though I didn’t have immediate access to a left-handed guitar, learning by playing a right-handed guitar upside-down kept me motivated because it was still a point of entry for me. So I think even working with that limitation can be worth it.

I play an upside-down, right-handed Danelectro.

I actually write with my right hand, but play right-handed guitars upside down as if they are lefty guitars. I also play bass and just about every other instrument that way.

I was self-taught and my first guitar had no cutaway, so I had no idea I was holding the guitar upside down. It just always felt normal to have the thinnest strings on top. I didn’t know I was playing upside down until my seventh grade talent show when the dean of my school freaked out about it.

I think my biggest challenge, since I play upside down, is that I can’t use the cutaway. Therefore, I can’t do “Guitar Hero” solos, but I think it’s made me a pretty damn good rhythm guitarist. Since I’m the only guitarist in my live band, it’s forced me to write with really intricate chords and riffs that also feel big.

I also hate when I accidentally hit the knobs on the guitar since they’re on top.

I definitely have certain riffs that can only be played upside down. It kind of limited me, but in a good way because I’m more creative when I feel limited or challenged.

Play however feels comfortable. Yes, it’s going to be a more expensive road, but you want to feel at home when you play guitar.

I have an Ampeg SVT Classic bass and an American Telecaster guitar, both flipped upside down.

I am right-handed, I just play left-handed.

My dad brought home an acoustic guitar when I was in middle school. It had no pickguard, no markings on it whatsoever. I played the clarinet and read treble clef, so it made sense to me that the lowest note was on the bottom. I didn’t hang out with cool kids so I had nobody telling me I was wrong.

Throughout my years, there is always one man in the back who comes up to me and tries to explain to me, who has played this way, and inevitably names a friend of theirs to which I just nod along and say, “Oh cool.” I really don’t mind talking about it, but it’s just funny how similar the conversations are.

After getting over the fact that it’s weird, I believe it’s special. I can be playing the same chord as you but in an entirely different way. Just listening to my recordings, you can tell that something is a little different. The way I play adds something sonically special.

My advice is for lefties about to pick up a righty guitar: If I could go back in time and learn the correct way, I would. I would tell myself to not be so stubborn. I’m garbage at palm muting because my strumming hand is not my dominant one. I would be so much better if I had learned the correct way. I would say to have patience and to pick a side where you don’t bash into your bandmates headstock every show.

For more lefty guitarists, check out “8 Lefty Guitarists You Need to Know About.“