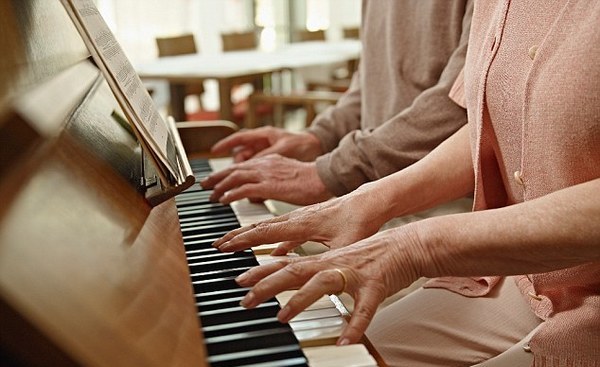 Reaction times are known to decrease in old age due to a breakdown in the brain. But learning to play an instrument could help keep adults alert, scientists found. Experts discovered musicians have faster reaction times than non-musicians

Pensioners should revive their youthful dreams of becoming a rockstar, new research suggests. Learning to play an instrument could prevent their brain succumbing to the effects of old age, scientists claim. A study found musicians have faster reaction times than those who are unable to play the piano, drums or a guitar. Alertness is known to decrease in old age, but experts say picking up the skill could keep their brain healthy.

Learning to play an instrument could prevent their brain succumbing to the effects of old age, scientists claim. Researchers from the University de Montreal, Canada, decided to see if there was a way to prevent the negative effects of aging on the brain.

They compared the reaction times of 16 musicians and 19 non-musicians. The musicians had started playing between the ages of three and 10, and had at least seven years of training. There were eight pianists, three violinists, two percussionists, one double bassist, one harpist and one viola player.  All but one also mastered a second instrument, or more. They were sat in a quiet, well-lit room with one hand on a computer mouse and their index finger of the other on a vibro-tactile device – a small box that vibrated intermittently.

They were told to click on the mouse when they heard a sound from the speakers in front of them – known as audio stimulation. While they were also asked to click when the box vibrated – referred to as tactile stimulation.  And when both happened, it was called audio-tactile. Each stimulation happened 180 times.

The subjects wore earplugs to mask any buzzing ‘audio clues’ when the box vibrated, in the study published in the journal Brain and Cognition. They found significantly faster reactions times with musicians for all three sensory stimulations.

Study author Simon Landry said the findings suggest that long-term musical training keeps people alert. He added: «The more we know about the impact of music on really basic sensory processes, the more we can apply musical training to individuals who might have slower reaction times. ‘As people get older, for example, we know their reaction times get slower. So if we know that playing a musical instrument increases reaction times, then maybe playing an instrument will be helpful for them.»

By Stephen Matthews, via