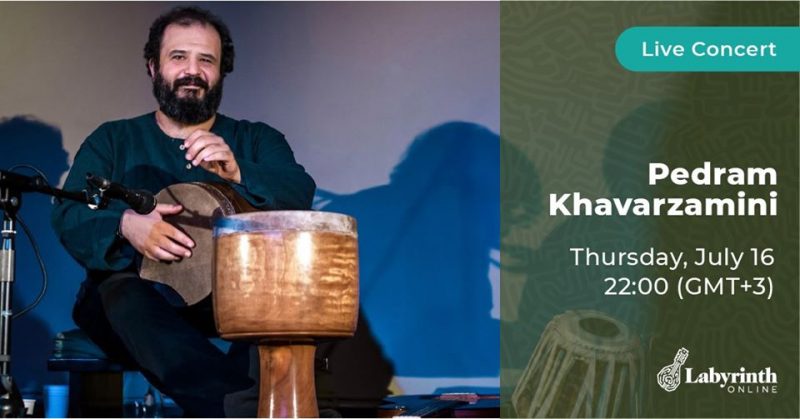 Pedram Khavarzamini, was born in 1975, in Tehran. He learned to play the tombak alongside to tombak masters Kamyar Mohabbat and Bahman Rajabi.

After 5 years of study, he began performing in public with Bahman Rajabi, duet for Tombak, and helped to write Rajabi`s second method book for Tombak. In 1999, in collaboration with Hamid Ghambary, he edited a book on collection of works by Amir Nasser Eftetah, one of Iran`s most famous tombak masters.

Pedram has his own percussion tombak group, named ‘Varashan’. He has also composed and released his first work for group tombak, named ‘Koutah’ with the percussionist Hamid Ghambary, produced in Iran and Europe. He is a member of the music group ‘Aftab’, and has performed in the music works composed by Reza Fayaz ‘Dargozar’ and ‘Dar Khane-ye Aftab’. Pedram Khavarzamini has worked with the famous classical Persian musicians Kayhan Kalhor and Moradi .

In 2003 he joined the ‘ Kayhan Kalhor ‘ensemble for a tour in the US and Europe, organized by the World Music Institute.

After meeting Ross Daly in Germany, Pedram decided to leave Iran and join Ross in Greece. He recorded ‘Iris’ with and under the direction of Ross Daly. This album is the meeting point of the most popular artists of Persian and Indian music: Pedram Khavarzamini, Dhruba Ghosh, Partha Sarathi Mukherjee, along with the Greek virtuosos Vasilis Rakopoulos, Kelli Thoma, Giorgis Xylouris. Pedram became a member of the Labyrinth group, directed by Ross Daly.

He met and played with very talented Greek musicians such as Stelios Petrakis, Vassilis Stavrakakis, Giorgos Xylouris, Kelly Thoma’ and also with some of the most interesting musicians from all over the world, such as Habil Aliev, Mohamad Rahim Khushnawaz, Dariush Talai,Shahram Nazeri, Ballake Sissoko, Dhruba Gosh, Khaled and Hossein Arman, Siamak Aghaie, always finding a way to bring his instrument to every kind of music.

Also he teaches Tombak every year (from 2005 up to 2014) in Labyrinth music workshop (Houdetsi-Greece) Beside, he recorded CD`s with great musicians such as Habil Aliev and Siwan with Jon Balke .

In 2003, Ali Akbar Moradi, famous tanbur player from Kurdistan, invited Perdram to play with him for the ‘Mehregan Festival’, in Yazd, Iran. In 2005, he joined Pejman Hadadi and the Zarbang ensemble for a concert in Koln, Germany.

Pedram has a unique way of playing the tombak in the sense that he keeps a traditional base whilst adding his own modern patterns. In this way he creates active rhythms and new sounds.

Pedram has played in some of the most beautiful places in the world such as ‘Theatre de la Ville’ in Paris, ‘Lincoln Center Hall’ in New York, ‘the Cleveland Museum of Art’, ‘the Thomas Jefferson Theatre’ in Washington, ‘the Chicago Cultural Center’, and in many different countries like France, Germany, Netherland, Belgium, Italy, Grece, Turkey, Switzerland’.