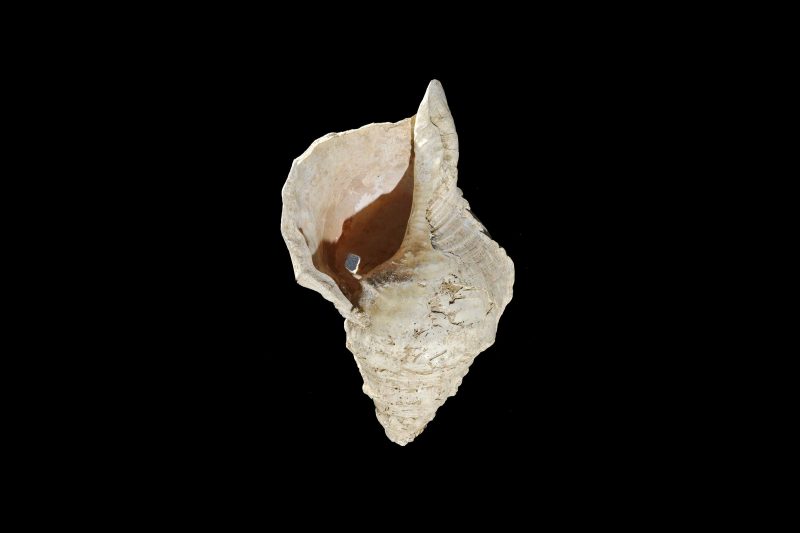 Listen to an 18,000-Year-old instrument sing once more

Long, long ago, a human modified a conch shell to belt out a tune. Here’s how scientists resurrected its triumphant sound.

SOME 18,000 YEARS ago, in a cave in what we now call France, a human being left behind something precious: a conch shell. It was not just any conch shell. Its tip had been lopped off—unlikely by accident, given that this is the strongest part of the shell—allowing a person to blow air into it. The shell’s jagged outer lip was trimmed smooth, perhaps to assist in gripping, and it also bore red, smudgy fingerprints that matched the pigment from a cave painting just feet away from where the object was found in 1931.

But those archaeologists missed its true significance: It was an intentionally crafted musical instrument. Writing today in the journal Science Advances, researchers from several universities and museums in France describe how they used CT scans and other imaging wizardry to show that a person during the Upper Paleolithic age took great care to modify the shell, the oldest such instrument ever found. They even got a musician to play it for us, revealing sounds that have not rung out for millennia.

The first clue to suggest this shell was actually an instrument is that broken tip, or apex. If you find a conch shell on a beach, you can’t just toot it as-is—you’ve got to knock that tip off to get air flowing through the internal chambers and to exit through the opening of the outer lip. 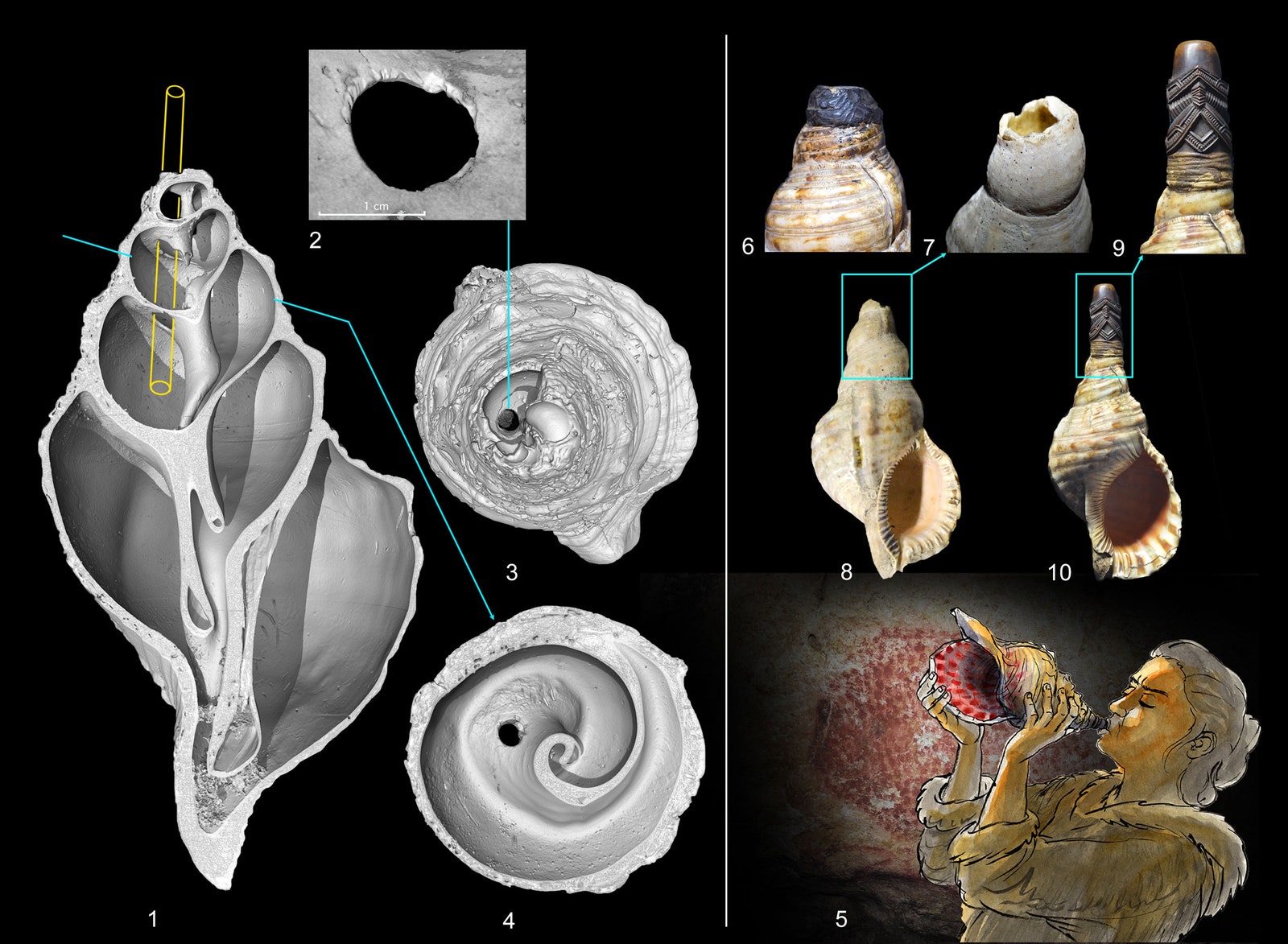 In the image above, you can see the CT scan of the shell’s innards. Image 2 shows a perforation in the spire. That illustration of a yellow tube represents what was likely a hollow bird bone that was attached to a mouthpiece and helped hold it in place.

At right, images 9 and 10 show a different conch instrument from New Zealand with a mouthpiece fitted to the broken apex. The French researchers reckon that this 18,000-year-old shell had the same accessory, not only because the extremely tough apex was likely snapped off on purpose, but because they found traces of a resin or a wax slathered around the opening, probably an adhesive to attach it.

An accidental third piece of evidence came from an unlikely source: The researchers had a musician try playing the shell in the lab. You can hear three notes below. The sound is a bit breathy, like a more earthy version of a trumpet or trombone.

But the breakage around the apex turned out to be quite jagged. “It’s very irregular, and it was hurting his lips,” says archaeologist Gilles Tosello of the University of Toulouse, a corresponding author on the paper. “He decided to stop because it was too painful.” Why would an ancient human take the trouble to modify a conch shell and then not add a mouthpiece, if it otherwise hurt like hell to play? 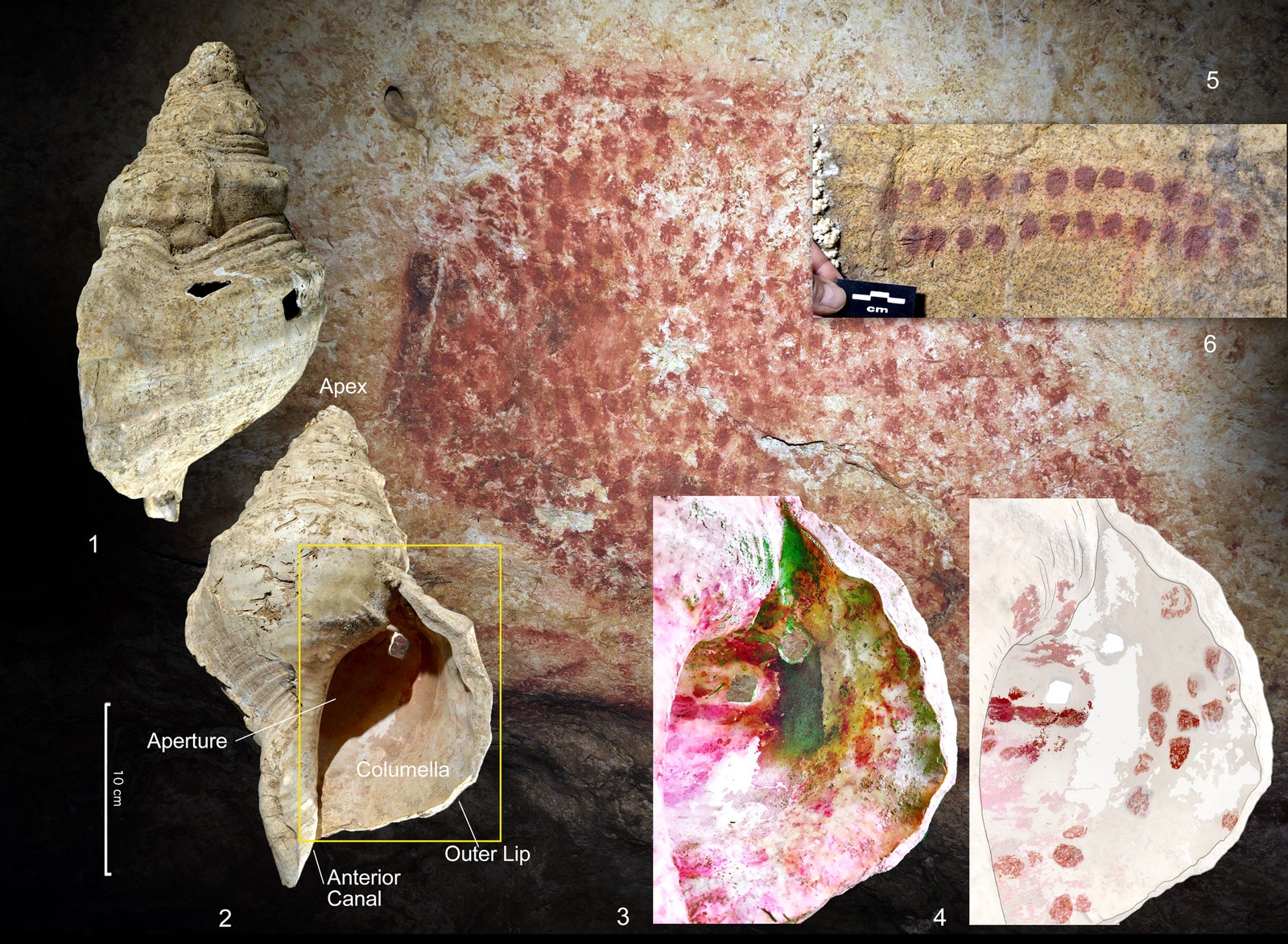 As for the shell’s outer lip, Tosello and his colleagues could tell it had been chipped away, both from wear patterns and by comparing it to pristine shells of the same species, which have significantly larger lips. In addition, the researchers enhanced a photo of the inside of the lip (images 3 and 4 above) to reveal faint red splotches. These are fingerprints left behind in ocher, and the pigment matches a wall painting of a bison that was mere feet from where the shell was found. That bison was actually etched into the wall, then covered with over 300 ocher fingerprints to shade it in.

The researchers couldn’t date the shell itself, since that’d require breaking a piece of it off to do carbon dating. But they could date a piece of charcoal and a fragment of a bear bone (yummy) that were also found in the cave. Based on these nearby objects, which they think would have been used by the same people around the same era, they surmised that the shell is likely 18,000 years old.

But what can this instrument tell us about the human who once put his or her lips to the shell, breathed deep, and belted out a tune? This was in pre-agricultural times, so they would have been Upper Paleolithic hunter-gatherers. Feeding 50 or 100 people would have been a serious struggle. “If you want to feed all these people, then you have to kill animals,” says Tosello. “Ecology teaches us that it’s impossible—the carnivores are always less numerous than the prey.” So it was more likely that this person belonged to a band of 10 or 20 humans working together to survive.

We also know that life must not have been too terrible, since people had the time and energy to make music. And after all, they didn’t need an instrument to make music in the first place. “With a voice, you can make music,” says archaeologist Carole Fritz of the University of Toulouse, a corresponding author on the paper. That is, the shell is extraneous: “It’s not an obligation,” she says.

“I think music is a very symbolic art for people,” Fritz adds. It would have had double symbolism, really—used in both everyday life and for spiritual practices. “For these people, the spiritual and life are the same thing,” he says.

This find emphasizes the richness of Upper Paleolithic culture, says University of Victoria paleolithic archaeologist April Nowell, who wasn’t involved in the research. “We have music, we have art, we have textiles, we have ceramics,” she says. “These were really complex people.”

We can also look to our own psyches for clues about the importance of music among the peoples of the Upper Paleolithic. Think about how music galvanizes modern humans: In the Before Times, we paid hundreds, even thousands, of dollars to cram into venues to not only hear our favorite artists, but to vibe with like-minded fans. We get chills when we hear haunting music, and get pumped as hell when we listen to Led Zeppelin III (“Immigrant Song” and “Bron-Y-Aur Stomp,” especially). And we still use music to get ourselves amped up to party. “I’ve been really interested in the Upper Paleolithic,” says Nowell, “in terms of how music might have been used to manipulate or redirect people’s feelings—about people both inside their culture or outside their culture—and how it could redirect action.”

This conch shell was far from the first-ever instrument. Archaeologists have found 40,000-year-old flutes made of hollowed-out animal bones with holes drilled into them. Ancient peoples likely also made percussive instruments out of gourds that could be shaken and taut animal skins that could be drummed. But those materials, unfortunately, are perishable, whereas this conch shell has persisted through the ages, still bearing literal marks of human ingenuity.

And here we are nearly 20,000 years later, listening to the same bellowing music of our very, very distant ancestors. “There’s nothing else on Earth, I think, that’s as powerful as music for bringing people together,” says Nowell. “This does it for us, even though we’re separated by 18,000 years.”