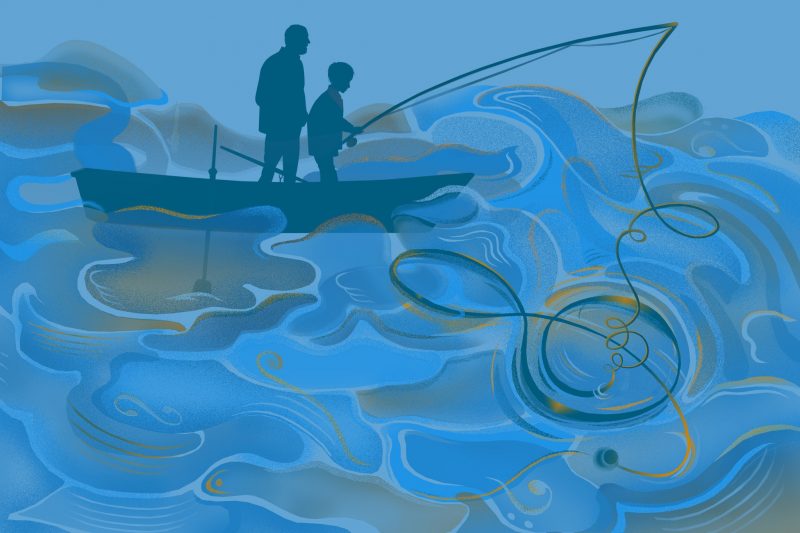 How Pavarotti brokered a bond with my dad

I was a closeted gay kid who loved Broadway show tunes. My blue-collar dad loved fishing and baseball. “O Holy Night” briefly erased the distance between us.

All the members of my family loved music in our own private ways — except my father.

As children we spied on my mother while she lemon-Pledged the coffee table, swaying to “I Hear a Symphony” by Diana Ross and the Supremes. Before music traveled wirelessly, my older brother spent hours connected to Led Zeppelin by a twisted cord that swirled up to bulging headphones. My younger sister stayed behind closed doors, emerging years later having mastered the lyrics to every rap and hip-hop song of the ’80s and ’90s.

I favored the soundtrack to “Annie,” tap dancing my way across the lemon-lime colored linoleum kitchen floor for months after receiving the album as a present. It telegraphed my secret — being gay. Disappearing into Broadway soundtracks ignited my spirit, much to the chagrin of my father.

A working-class auto-body painter, he preferred reading the local newspaper, The Pottsville Republican, uninterrupted and receiving a hot meal at the dinner table by 5 p.m.

Our attempts at bonding failed miserably.

Fishing felt like an endless waiting game as we struggled to fill the hours with conversation. My line always drifted downstream amid my daydreaming.

“Why aren’t you watching it?” he yelled as he ran into the water to remedy my mistake.

“I am watching it,” I insisted.

“Get your head out of the clouds and pay attention.”

Worse was his ill-fated attempt to enroll me in the Railway Park Little League baseball division where he volunteered as an umpire.

“You got to hold the glove like this,” he said. “No, like this,” as he demonstrated how to position the glove and my other hand to capture the ball barreling toward my face in left field. During my “at bats,” he blurred the line between father and umpire by whispering, “swing,” as the ball approached me. I responded with a delayed chop at the air long after the ball had passed the plate.

It became clear I wasn’t going to transform into the man he dreamed I’d become. The only macho in me came out when I belted the lyrics of the Village People’s “Macho Man” around the house.

Over the years our shared experiences were whittled down to car rides as he chauffeured me from drama club or band practice in high school and then to my college campus in Ohio, eight hours away from our home in Pennsylvania.

At the young age of 60, Dad developed a brain tumor; he stopped working after his surgery and spent his days resting at home. Previously he’d shown little interest in music, but suddenly he discovered opera. Pavarotti was his favorite.

“He found your old portable CD player and he was listening to operas and crying,” confided my mother, spying on him like a middle-aged Nancy Drew. Once gruff and irritable, Dad became softer and more sedate in his illness. As more tumors claimed permanent residence in his mind, my mother was unable to care for him at home and we had to move him into a nursing home.

During the holidays, I tried to spend more time with my family and my dad. Artificial cheer filled the hallways in the nursing home — the stage set, enter Christmas. Mini parties spilled out from patients’ rooms, and carolers sang in an effort to make us forget that death hovered right after each breath of “Ho! Ho! Ho!”

I was at my father’s bedside when a singer down the hall started “O Holy Night.” His voice was surprisingly good — a robust tenor vibrating on long sustained notes, like Pavarotti, beckoning to us.

“That’s my song,” he whispered.

He had a song?

He sat up in bed and started to cry.

I wished we had traded his love of the outfield for opera years earlier. It might have provided the opening I desperately needed to tell him I was gay. I didn’t come out to many people until I was 20 years old, after he had died. During his life, it remained my secret — and maybe the secret he privately knew about me. It was a wedge that kept us forever at arms’ length — except for this moment.

I listened to the carolers and that singer down the hall, gripping my father’s hand as he smiled from the surprise of hearing “his song.” In the quiet of that room, the intimacy of our father and son bond took shape, albeit belatedly in our lives, as the singing grew louder during its climatic finish.

Throughout my childhood, my family had missed out on the joys of sharing music with one another. With three kids, two parents, two loud TVs, one bathroom and rarely anything approaching silence, music served as each individual’s private escape. How surprising to realize that my father had subscribed to our secret club all along.

We had never listened to opera before that brief time in our lives. And after my father died, the opera music exited quietly. Pavarotti had left the building.

What remained was my family’s love of melodies that made us dance and sing. Over time, those once private sessions became public displays of appreciation. I dragged my mother to Broadway musicals, and we clapped and sang the tunes out loud. My sister and I groaned when trapped in a car listening to my brother croon Sinatra and Dean Martin tunes, finally succumbing as we hummed along with the ones we liked too.

During the holidays when my father’s song soars most frequently, I still catch myself.

It’s a reminder of a time when one piece of music brought us closer, hands held tightly together. For a moment we were father and son, sharing something pure and beautiful, no sickness or tangled fishing lines or strikeouts between us.

“Dad, there’s your song,” I think to myself.

Scott Gerace, a writer who lives in New York City, is working on a collection of essays about the men who shaped his life.